Kitchen taps: how to choose the most appropriate one? 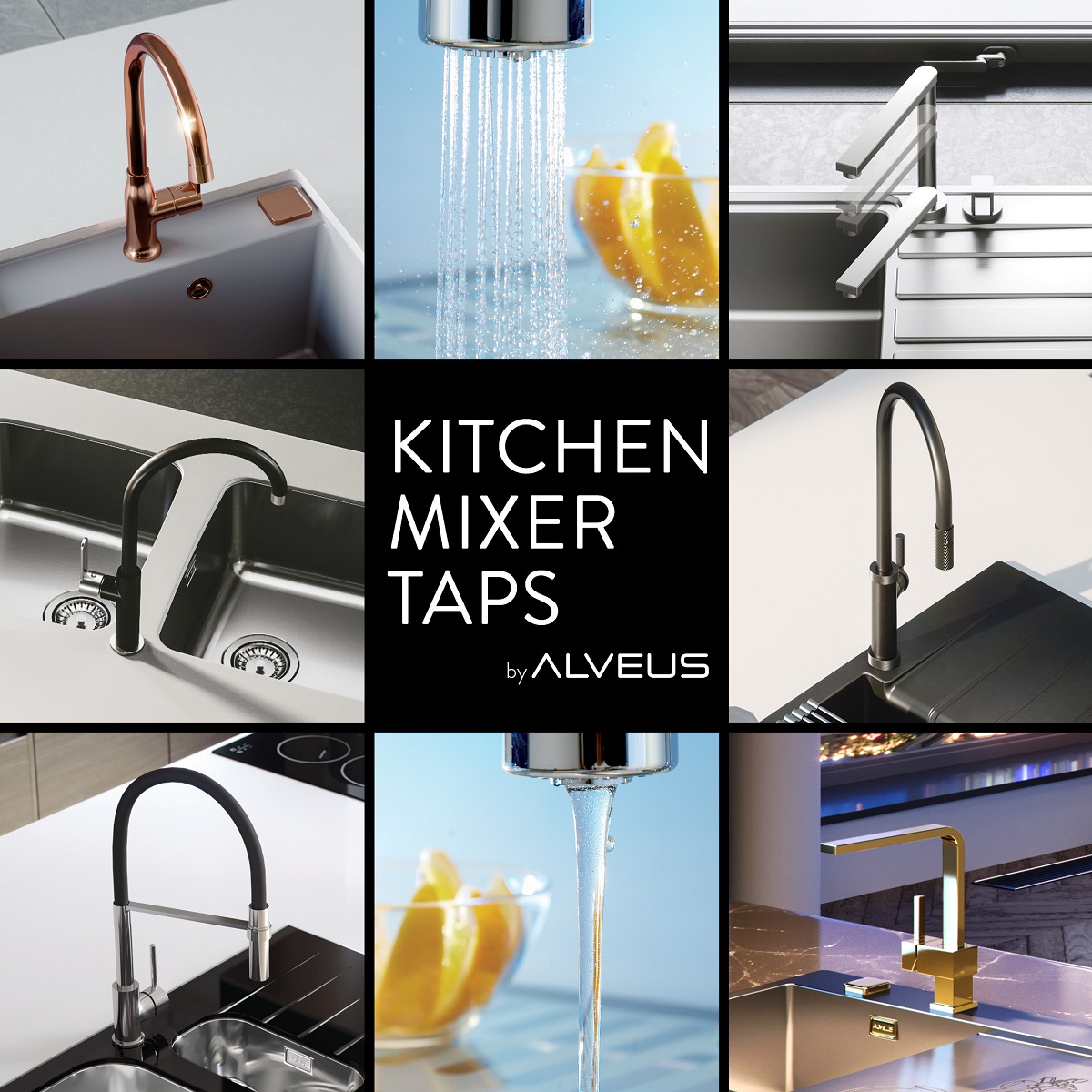 Our Alveus specialists, therefore, advise you to take into consideration the following four factors when choosing your kitchen tap: appearance, functionality, properties and cleaning. 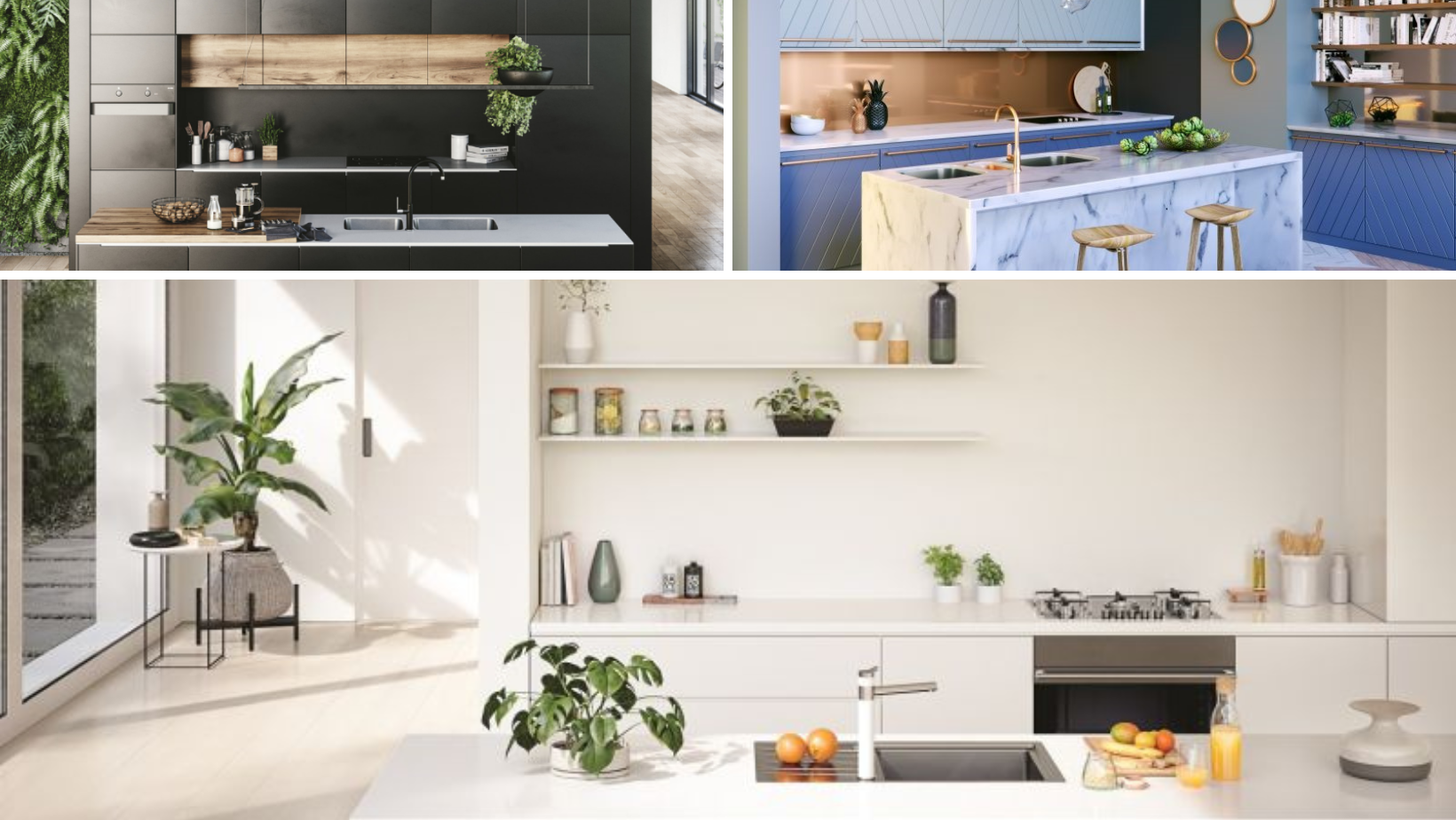 Rising proudly above the kitchen countertop, the kitchen tap is definitely an element that draws the looks of visitors.

It is therefore important that it matches the appearance of your kitchen stylistically and aesthetically. In terms of appearance, the kitchen taps can be divided into two subsections: 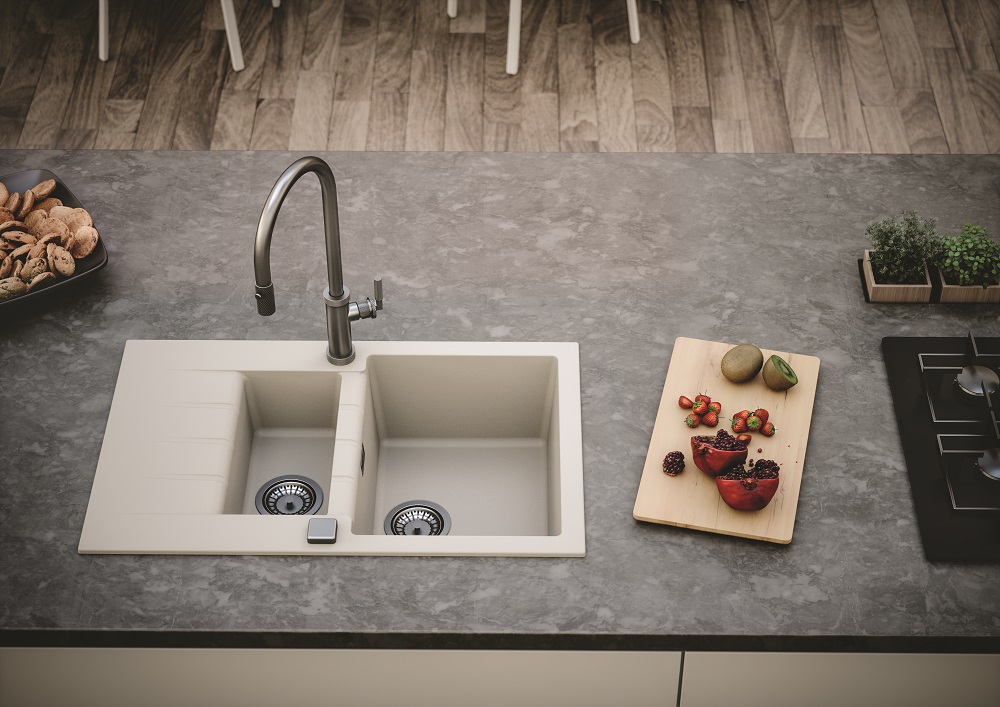 The Alveus kitchen taps are made of brass and stainless steel.

Such kitchen taps are extremely durable, eternally elegant, shiny and easy to maintain and besides that they suit perfectly to any kitchen style.

You may choose a kitchen tap with sharper and straight lines or more modern rounded lines or perhaps you prefer a popular U-shaped kitchen tap or a special one with a pull-out spout – Alveus can offer you just about everything. 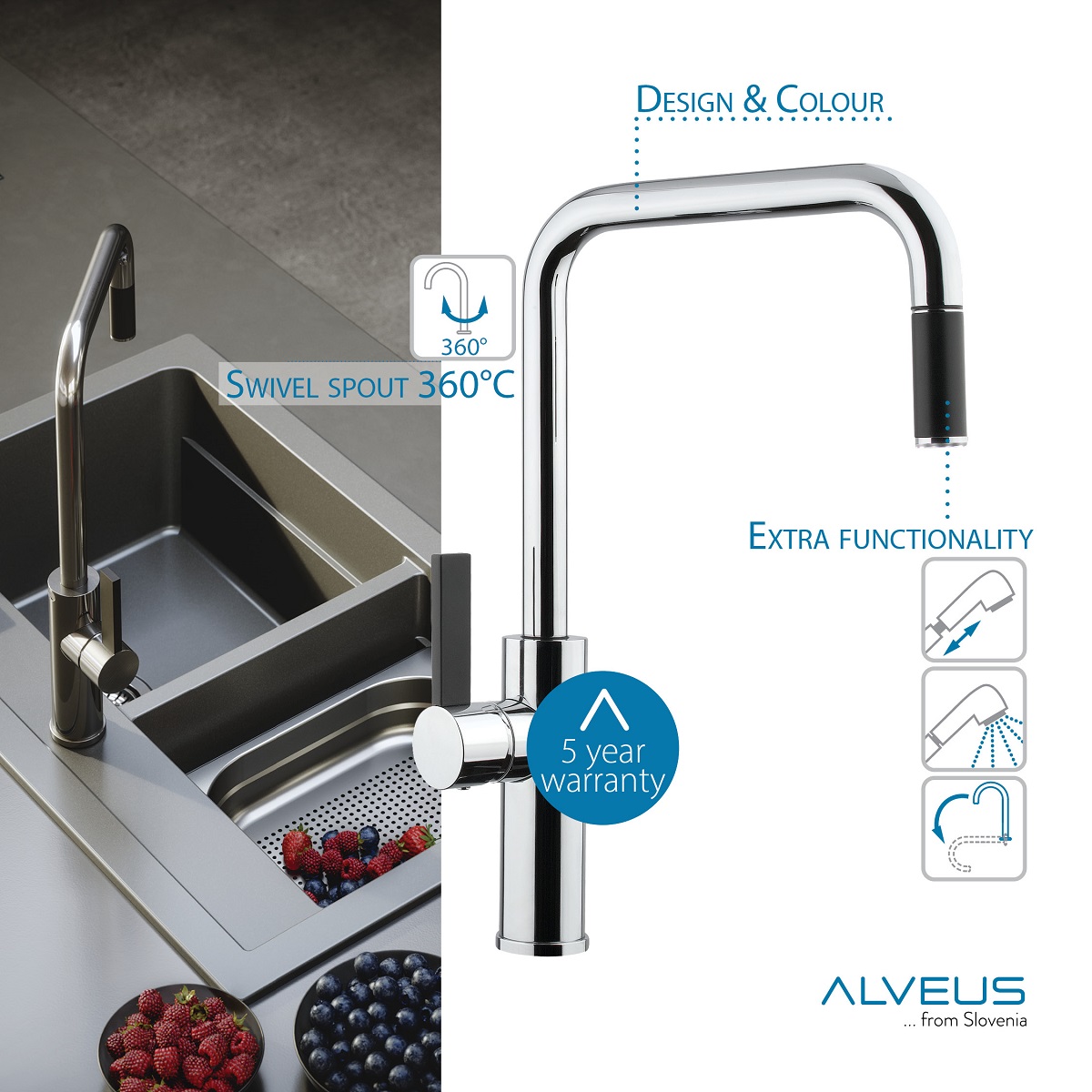 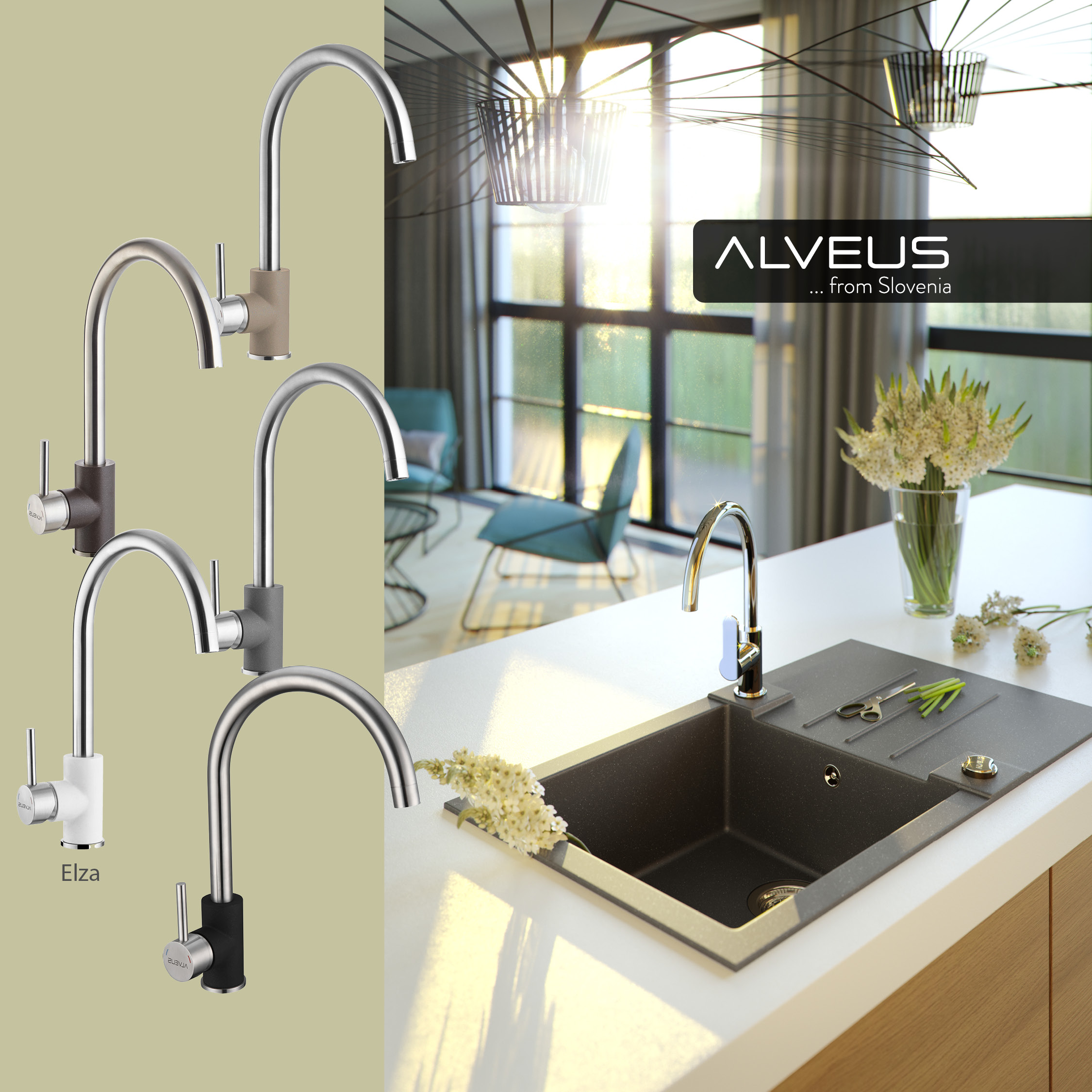 the Alveus most prestigious Monarch line enchants everyone, as it offers all the beauties and properties of stainless steel, which were upgraded with special treatment in four additional colour options – gold, anthracite, copper and bronze. 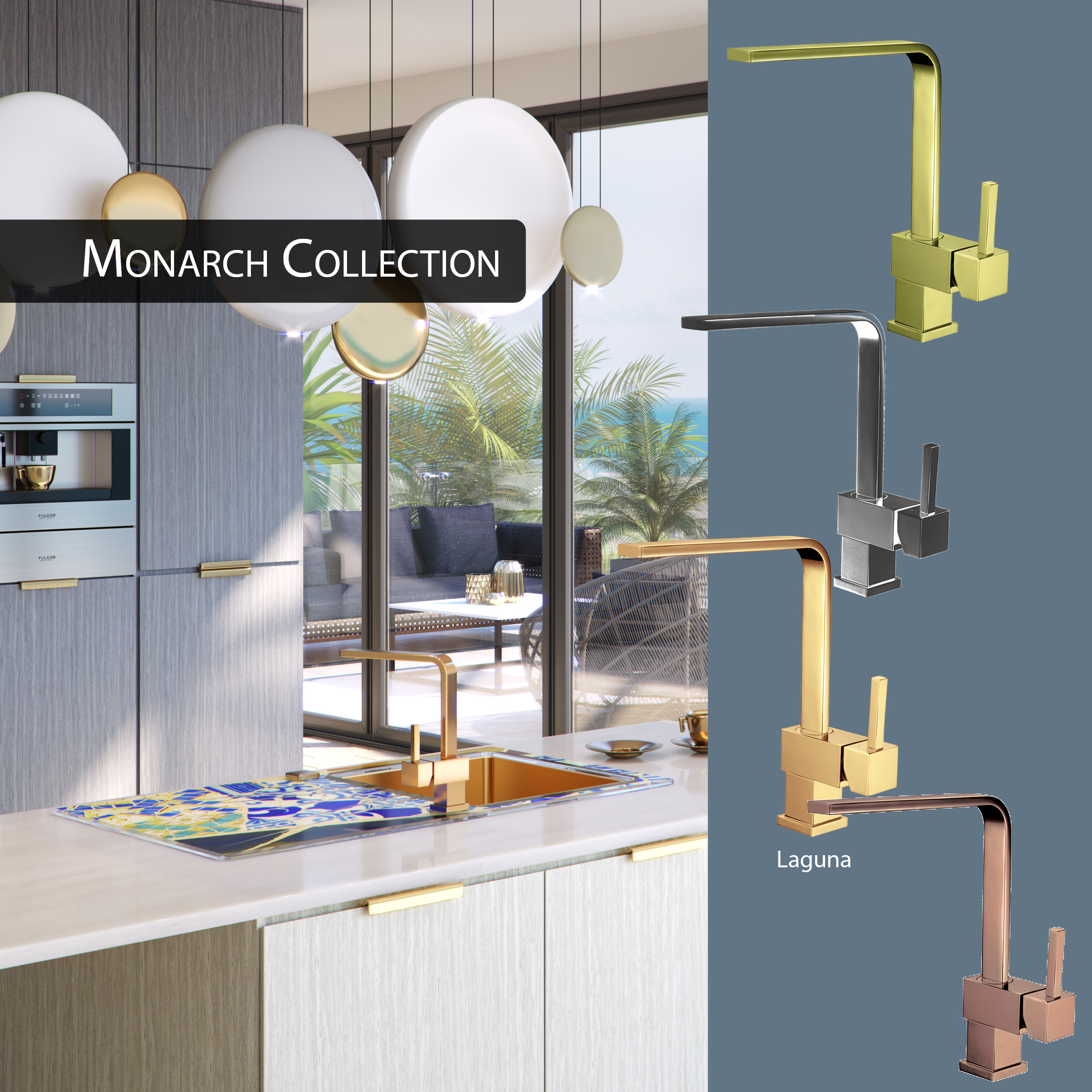 These fit perfectly into a dark kitchen and upgrade it with their special shades to extremely chic and elegant, while they add a touch of glamour to a white kitchen. 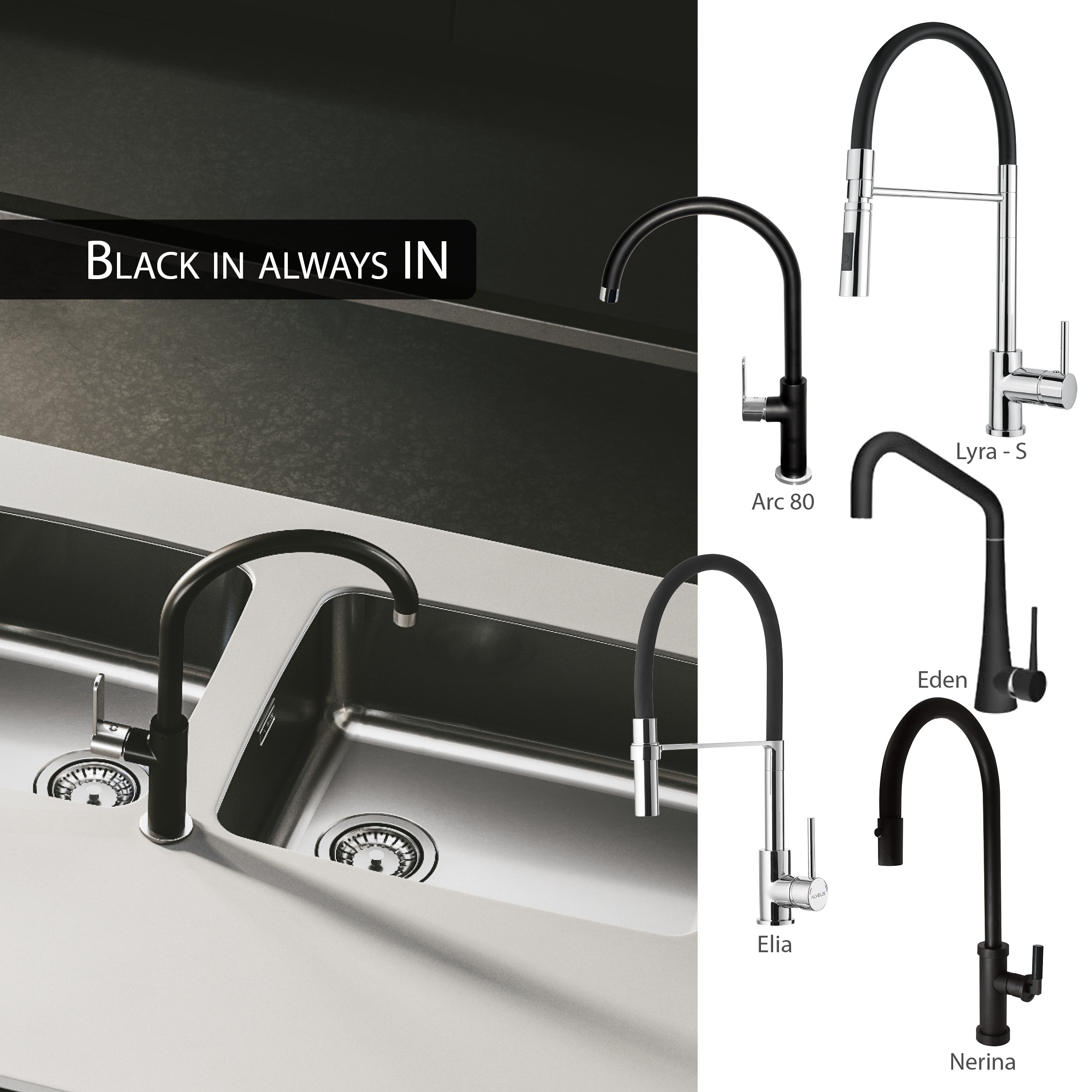 You can never go wrong with black colour - even when it comes to choosing the kitchen tap.

Dare to combine black colour with a gold shade and enhance your kitchen into an elegant, chic space.

Shape of the kitchen tap:

The kitchen taps with their shapes surpass their functional value and offer pleasure for use and eyes.

Regardless of which material of kitchen taps you choose, Alveus has in its offer the kitchen taps for every taste:

When choosing the kitchen tap you should not choose only with your eyes. Also the functionality of the kitchen taps is important so please just read on.

2. What do you demand from your kitchen tap?

Although your kitchen tap looks so beautiful you will not be completely satisfied with it if it does not meet your needs.

Therefore you can find in the Alveus offer a rich and technologically advanced range of kitchen taps that are distinguished by diverse functionality.

You can find all of them here.

Many times, however, it would be easier for us to bring the tap closer to the kitchenware or to spray the salad with a wider jet or shower – therefore we developed at Alveus the kitchen taps with pull-out spouts, shower function or we combined both in the same kitchen tap.

These models are marked with P (pull-out spout), S (shower function) and PS (both functions). 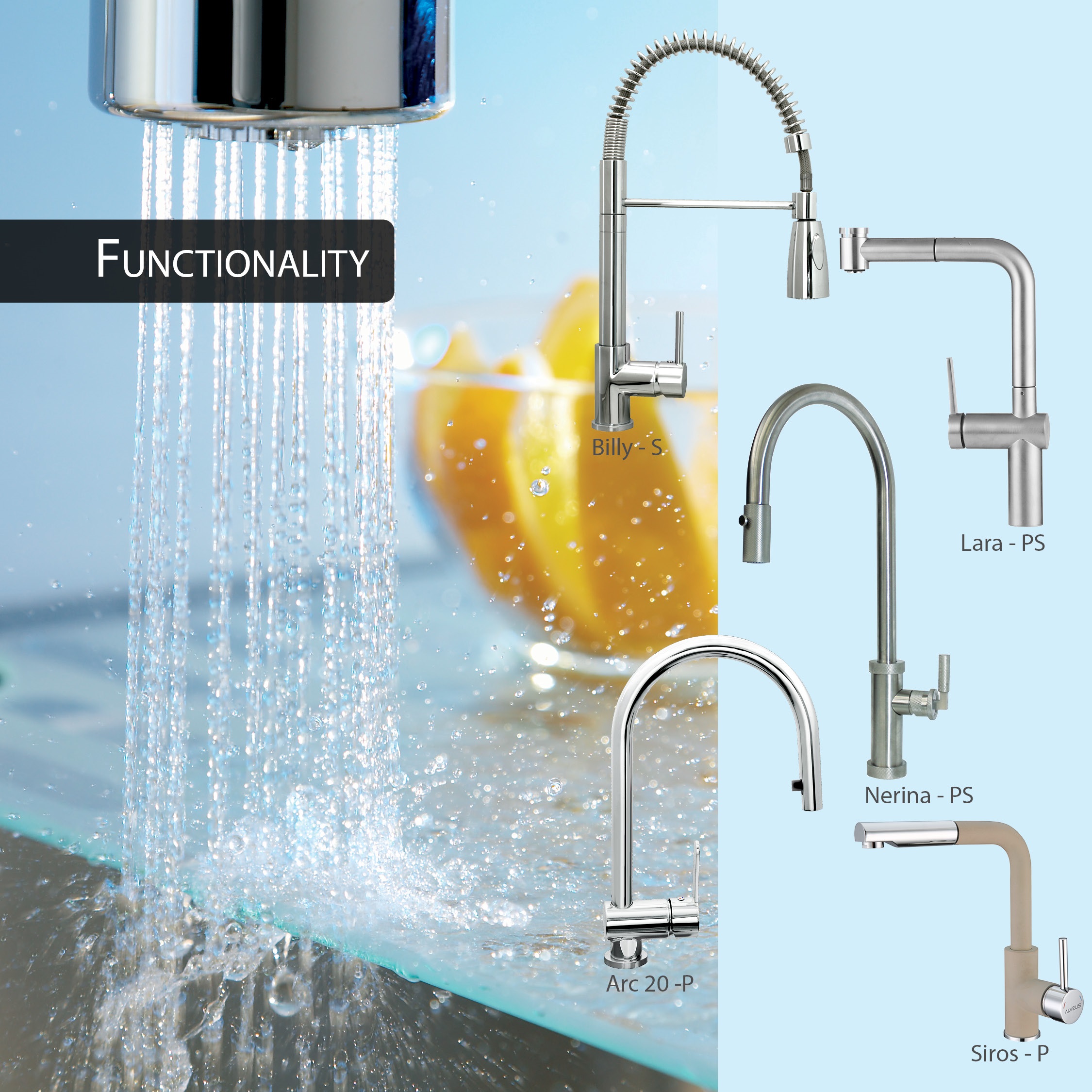 Due to their practicality the kitchen taps with a shower function or pull-out function are becoming increasingly popular in domestic households, although they were initially introduced in professional kitchens.

A novelty in our offer is an elegant kitchen tap Zeos P, which is available in a modern black or classic white version. 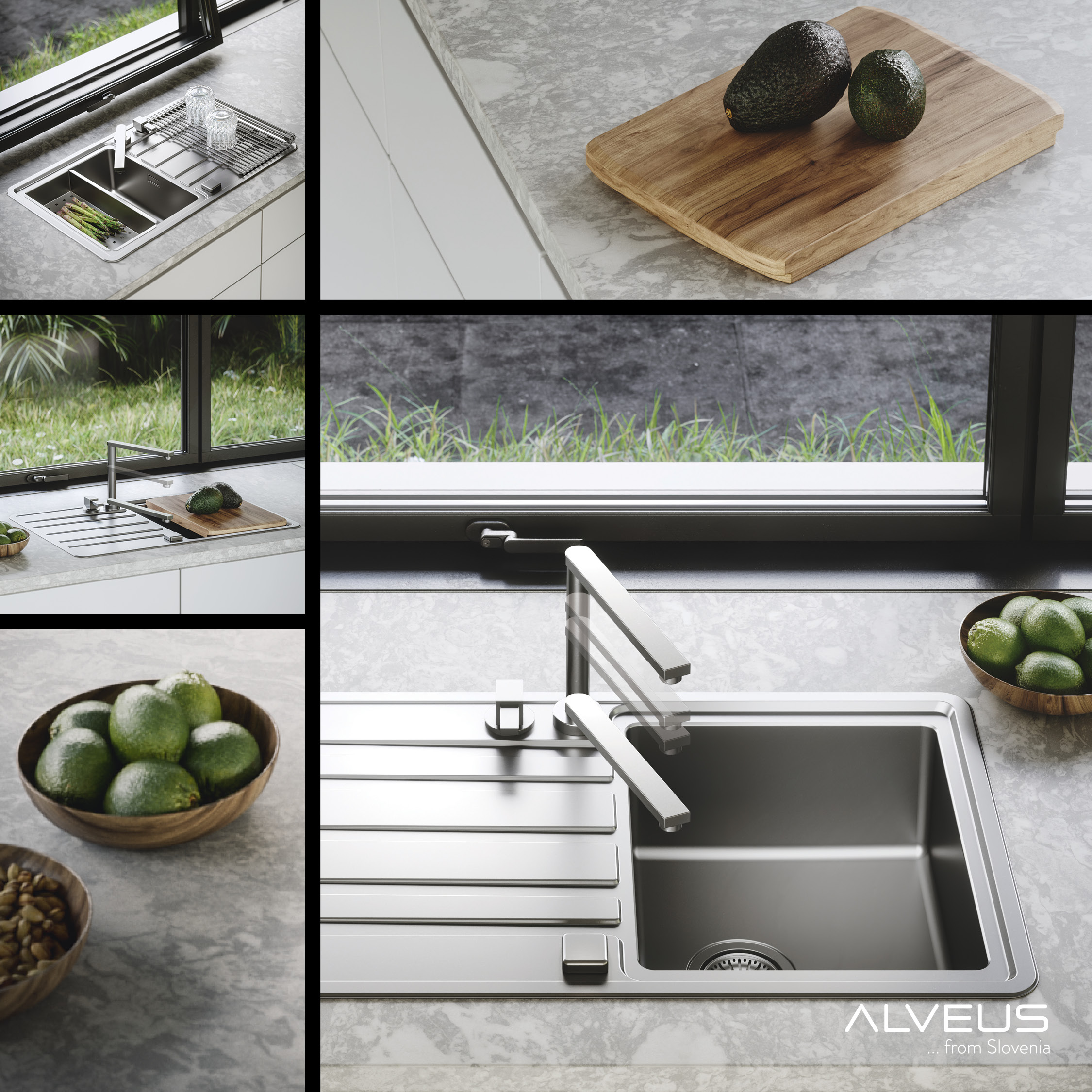 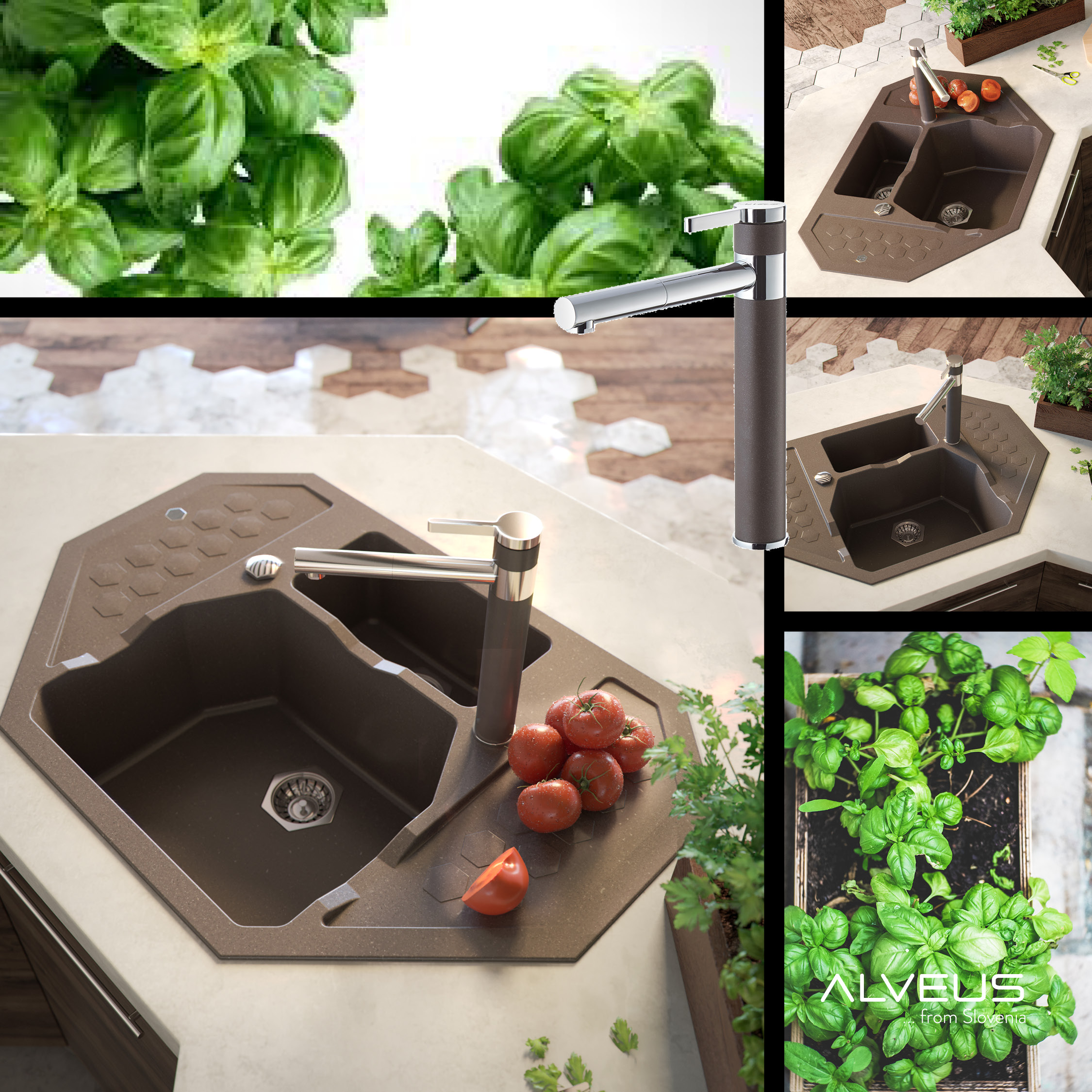 Do you often have your hands dirty or covered with dough at your culinary endeavours but you need still little water urgently or would like to wash them quickly?

To reach the handle without making a half of kitchen dirty is often »mission impossible«, isn't it?

At Alveus we have considered also such endeavours. The kitchen tap with a handle on the top is ideal, functional solution.

It provides quick and easy access to the handle. You have a choice of classic kitchen taps, for example Cleo PS gentle Zenit and Granital look or our new beauty, a trendy kitchen tap Zina Monarc. 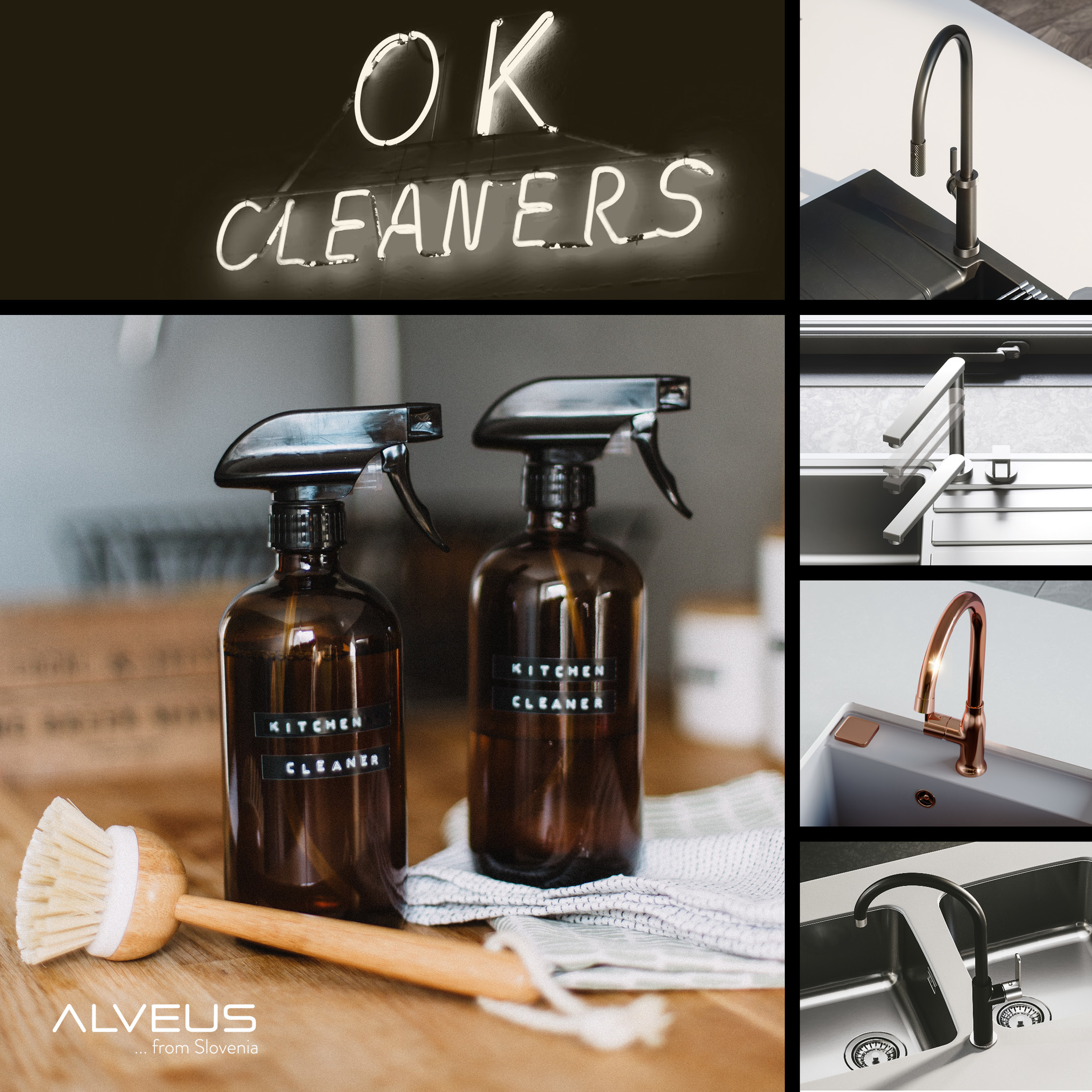